I arrived in Ushuaia on the night of Friday 11 December, after a 14 hour bus trip from Punta Natales in Chile that would have been gruelling if I hadn’t slept for most of it (see my earlier post, Border Crossings).I’d wanted to visit Ushuaia because of its location: it claims to be the world’s most southerly city,’the end of the world, the beginning of everything’. There is actually a place in Chile, Puerto Williams, which is further south, though it’s a small settlement around a naval base and doesn’t exactly qualify as a town. Both are right at the bottom of Tierra del Fuego, which for some reason I’d always thought was a town, but which is actually an island, or more accurately, an archipelago, split between Chile and Argentina.

Ushuaia has a population of about 80,000 and has grown rapidly over the last 20 years or so. Due to its tax free status it has a lot of assembly industries and a big container port trade. It also has a very visible tourist industry. Property prices are high, leading to housing problems for locals, of which seemingly there are very few: most people have moved into the area for work and to take advantage of the higher salaries paid there. Despite being quite upmarket – and noticeably more expensive than other parts of Argentina, even by Patagonian standards – the stacked, dusty streets and colourful houses with steeply sloping roofs give it an appealingly ramshackle air. And its setting is stunning: surrounding the town on in a huge craggy arc are snow-capped peaks and in front of it sweeps the enticingly blue expanse of the Beagle Channel. I also had in the back of my mind the notion that I might buy a cheap last minute trip to Antarctica, as I’ve always wanted to go there. I set myself a couple of ground rules: an upper limit on how much I would spend, and a 3 day limit on the time I was prepared to wait for a boat. Within a day of arriving I’d broken both of these self-imposed guidelines, having booked a trip that cost $1000 more than my limit and which didn’t leave until 20 December, nine days later. It was definitely worth it though: I will be blogging about this magical trip in future posts.

So I found myself with time to while away in Ushuaia. This gave me the chance to be ill for a couple of days, to relax and to explore some of the beautiful scenery in the area, as well as sample some of the most welcoming coffee shops, of course. One morning I set off to hike up Cerro del Medio, which promised a bird’s eye view of the town and of the famous Beagle Channel, the passage of water at the south of Tierra del Fuego. It’s named after Darwin’s ship, HMS Beagle, which navigated the waters on its 1826-30 expedition to survey the coasts of South America. I’d thought that the whole trip would be about four hours, and feeling tired from having done quite a few treks in the previous few weeks, my heart sank a little when Constanza at my hostel told me it was more like four hours each way to the mirador (viewpoint) with an extra couple of hours if I wanted to get to the laguna (lake) further up. She couldn’t say if it was worth pushing on to the lake as she’d never made it beyond the mirador. But I reached for my trusty red fleece (in terms of cost per wear, Mountain Life or whoever made it must be paying me by now) and set off.

If you go down to the woods today, be sure to follow the yellow markers. Or else you’ll get lost, as I did. To be fair to me, close to the start of the trail the path veered across a bridge, which due to the high water conditions at the time, was partially submerged. If I’m honest though, I didn’t even see the bridge as I swung confidently off to the left. Before long the path started fronding off in different directions and I got a bit hazy about which to choose. When I heard a deep-barrelled bark and saw a hefty Doberman out of the corner of my right eye, I began to have serious misgivings about my selection. After roaming aimlessly for a while, being careful to give the dog as wide a berth as possible, trying – and conspicuously failing – to retrace my steps (despite my numerous qualifications in geography I still seem to have a terrible sense of direction), I spotted a young woman coming out of the corrugated iron Doberman house. I called out for directions, not wanting to go too close on account of the still-growling hound, but she beckoned me over and eventually, no doubt seeing the blank look that tends to cloud my eyes when someone gives me directions, she kindly offered to lead me back to the bridge. Like Constanza, my self-appointed temporary guide had never been to the laguna, but she’d heard it was nice. I found this surprising: I know I was slightly lost, but this woman only lived about 500m away from the trail! And once I’d crossed the bridge, getting my feet slightly wet in the process, the yellow markers were pretty obvious …

The path was gorgeous. It led through a wood of tall, slender-trunked trees, draped in the pale metallic green froth that seems to be endemic to Patagonia (I later found out that this plant is known as barba de viejo, old man’s beard). The trail wound its way relentlessly up until the silver trunks gave way to narrow red ones, the trees creaking in the wind like an open door. Then it broke out onto the foothills of a looming grey mountain backlit by a perfect blue sky and wreathed in snow. A short shuffle up a snow-covered slope led to the mirador, which did indeed offer a perfect view of the town, the bay and the Beagle Channel. I watched a tiny white plane come in to land and marvelled at the layered palette of colours in front of me: the flint grey of the mountain’s brittle rock; the bronzed browns of the springy bracken-like plants; the orange-brown hues of the lichen-rusted rocks, the deep green blanket of the forest; the washed blue sky and the darker glowing blue of the sea. I was the only one there and the sense of isolation was immense, at the same time exhilarating and unnerving. I saw only three other people during the whole walk: a keen walker on his way back just before I took the wrong turn right at the beginning (he must have made what Florian, who I trekked with in Torres del Paine called an ‘early early’ start, as opposed to my ‘late early’ start, where an intended early morning departure had somehow become a much later one) and a couple sliding down the snow slope as I was going up it. They assured me it was ‘vale la pena’ (worth it) to press on. And it certainly was.

The final stretch from the mirador to the laguna led around the shoulder of the mountain and then scrambled up loose slaty stone, and was buffeted by gusts of a burning cold wind. At first glance the stony landscape looked empty and barren but in fact it sustained a covering of vibrant lichen and strands of a dark green, fronded plant that waved in the wind like seaweed in the shallows. When I got to the laguna it was snuggled in a flat-bottomed bowl beneath imposing snowy slopes. It was still half-frozen, capped with an icy slush in parts, the other parts clear pure water. Breathtaking. The force of the blasts of wind that intermittently whipped around the peak was quite scary, so I hunkered down behind a large rock to eat my lunch and soak up the splendour. I felt as though I’d reached my own personal Torres del Paine (a stunning national park in Chile that I’ll be blogging about later). And after a swift descent I was still back in town in time for coffee and homemade chocolates in Laguna Negra.

Photos to accompany this post attached and can also be viewed at Picasa at http://picasaweb.google.com/lizgooster/IfYouGoDownToTheWoodsToday?feat=directlink 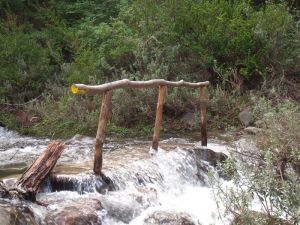 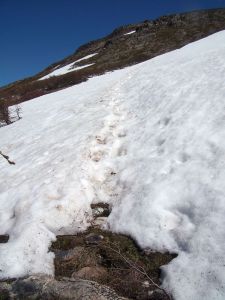 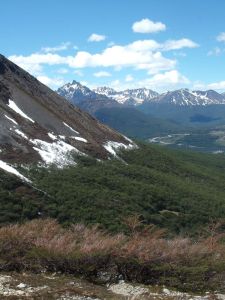 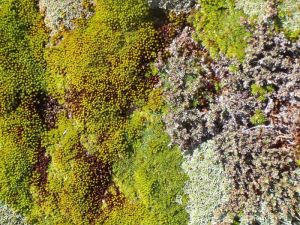 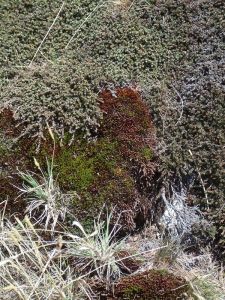 2 thoughts on “If You Go Down to the Woods Today …”